In September 2021, a herd of overheated dinosaurs walked from Bath to Bristol to raise money for Bluebell. Here, Holly from our Buddies team gives us the lowdown on the intrepid T-rekkers. 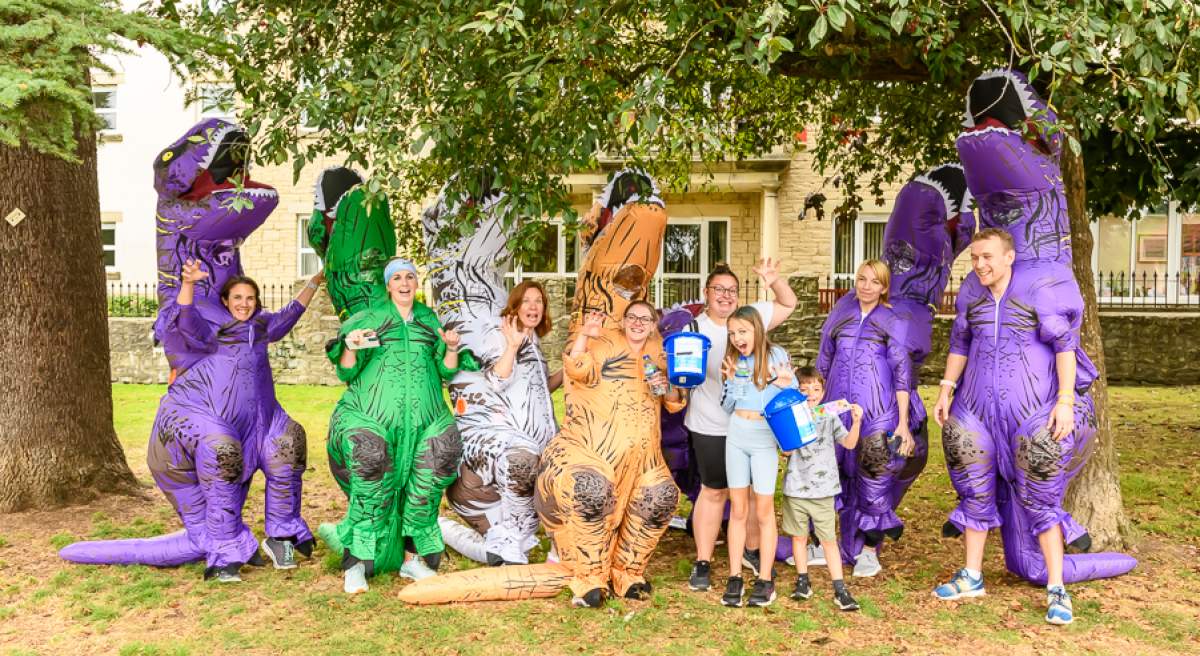 We’ve never had a fundraiser quite like this before! How did you dream up your Dino T-rek?

My fellow Buddy Jo and I wanted to do something to celebrate Bluebell’s 10-year anniversary and represent our work in Bath and North East Somerset (BANES) at the same time. One of us said, ‘We should do a sponsored walk dressed up as dinosaurs or something.’ It was just a joke. But then I thought, ‘Let’s do it!’. I’m quite a bull in a china shop when I get an idea in my head. I don’t think about the ramifications and how difficult things might be!

It was complicated. I had to clear things with the Highways Agency and the police, who couldn’t shut the roads for us. They said we’d need to find a route that would incorporate public pathways but not cycle paths. We also had to let other pedestrians walk past us safely, without anyone needing to step into the road. I spent a whole evening driving round Bath and Bristol trying to figure it all out. 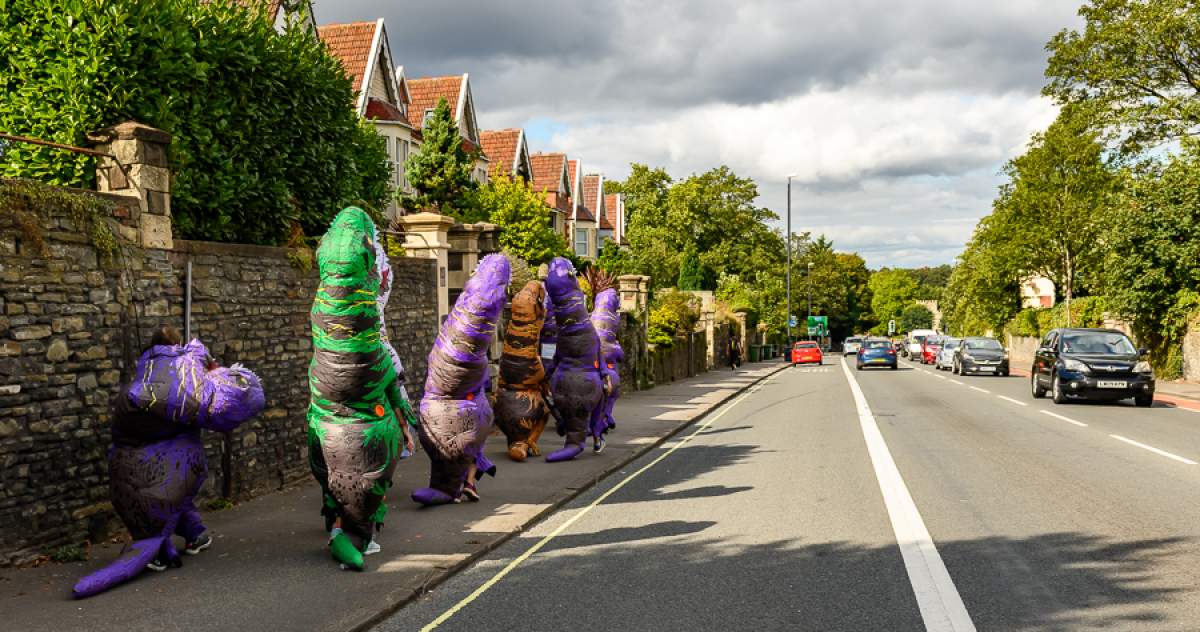 How did you find willing dinosaurs for your T-rek?

Jo and I roped in some friends and some Bluebell staff got involved too: Sasha, our chair of trustees, and Jodi, our ops manager, offered to join us for part of the walk.  Some people were a bit hesitant at first, wondering if we really could walk 10 miles in inflatable dinosaur suits. I told them, ‘Don’t worry, people run marathons in these costumes – it’ll be fine!’ Little did I know…

What’s this about a T-rex being spotted in Lidl?

The rumour is true! I started doing my weekly shop in my dino suit – you can imagine my 10-year-old daughter’s mortification. Jo and I also made a little promo video - we tried to copy a TikTok dance in our dino suits, which was carnage but very funny. It really helped our fundraising.

Did you give yourself special dinosaur names?

We did - I was Buddy Hollysaurus and Jo was Joannasaurus Rex.

You started your T-rek at Bath Spa university, heading first to Saltford and then to Keynsham. What kind of reaction did you get?

It was brilliant. Everybody on the roads was beeping, honking, videoing us, taking photographs and tagging us on social media, running over to give us money. That support was just what we needed because it was really hard work walking in those suits – I was ridiculously hot in mine, and at one point I was caught on Facebook Live taking a tumble! When we got to the memorial park in Keynsham, we were all dripping with sweat. I felt like I’d run a marathon – I wasn’t sure I’d be able to carry on.

What kept you going?

We had a 45-minute break at the park, which really helped. It was very busy with families and all the children were really excited to see nine dinosaurs parading in. Lots of our families and friends came along with food and drinks, which was lovely.

We’ve got to ask – how did you go to the loo in your dino suit?

There’s a cash for cars place on the Bath Road and the guy there was really great, giving us cold water and letting us use the toilet. It takes time to deflate and inflate the suits and we couldn’t all squeeze into the little office there – so at one point the guy had nine dinos changing on his forecourt, all boiling hot and desperate for a wee! 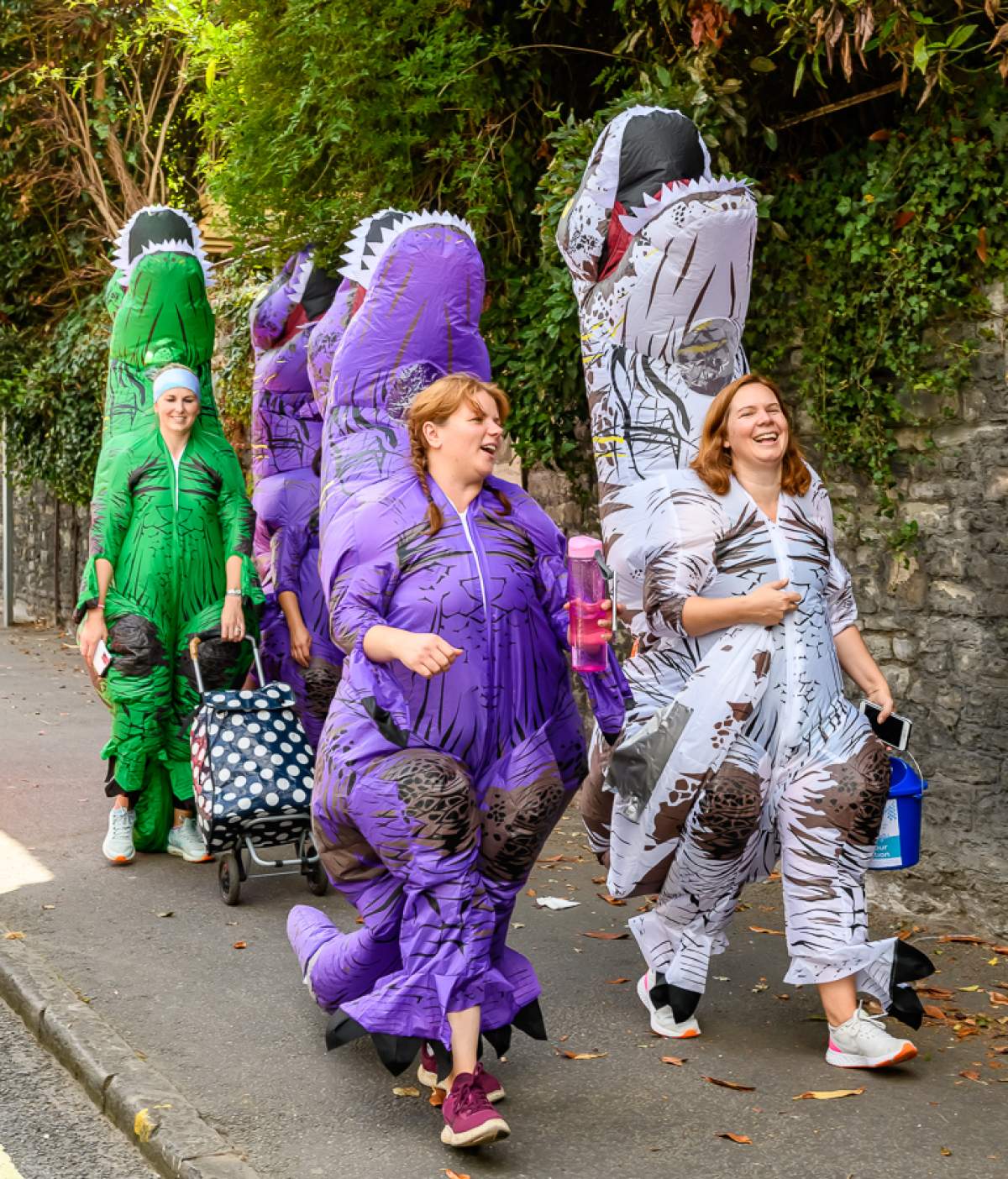 How was the T-rek into Bristol?

We got loads of attention as we walked on a path along the Bath Road dual carriageway. As we came into Bristol, the team at Bristol Blue Glass invited us in and put money in our buckets. Sasha, Jodi and Ruth from Bluebell had lunch waiting for us at Arnos Vale, and families we didn’t know turned up because they’d seen us on social media. At Queen’s Square, the finishing point, we were met by families who’d been supported by Bluebell. They told us how much we’d helped them and that they’d wanted to come down and donate.

So how much money did your T-rek raise in the end?

We made around £300 on the day. With Just Giving, our total came in at £3341 – over three times our original target. We were also happy to have raised awareness around the fact that Bluebell supports parents in BANES as well as Bristol. That felt really good – and so did lying on the sofa with a takeaway on Saturday night!